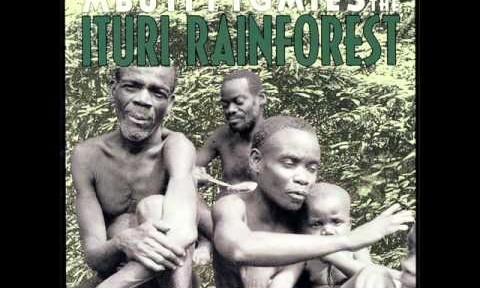 During the 1950’s, British-born anthropologist Colin Turnbull lived with and studied the Mbuti pygmies of the Ituri Forest.

A series of recordings were made in northeastern Democratic Republic of Congo (then the Belgian Congo), including the music released on “Mbuti Pygmies of the Ituri Rainforest.”

Listen to Molimo Song: Darkness is Good at Smithsonian Folkways

From the liner notes:

This is one of the most serious molimo songs, and may be sung only by initiates. It expresses the devotion of the Mbuti to the forest, and their trust in it. This is a song sung in a time of crisis, but the word contain no plea, no reproof. They repeat one of the many names by which Mbuti call their god, and express their trust. A free translation is:

This piece in particular includes the classic cyclical, call-and-response style. Note the third part, softer in the background, playing as a descant, though male, voice part.

Based on a pentatonic scale, used in many traditional African musics, check out the differing temperament or how notes within a scale relate to each other. If you try to play the notes of the song by ear on piano, you’ll hear where notes sync with Western temperament and where they are uniquely their own.

In the response part, the chorus sings two notes that create a beautiful dissonance, technically-speaking using the fifth note and a sharp fourth of the scale. The latter is what might be called a “blue note” is Western music.