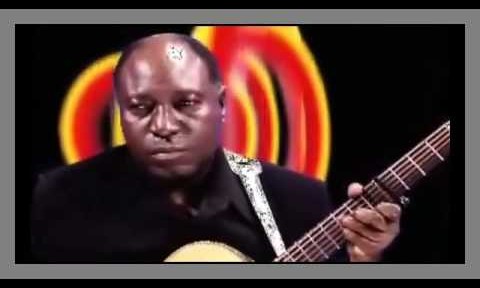 While many songs by Kékélé have a sure place in my heart, “Mbote ya Pamba” holds the honor of being the first song of theirs I’d ever heard.

Not really knowing what I was going to hear when I pressed play, I was delighted with the bright, sweet, and soulful opening by guitarist, Syran Benza.

With a classic Congolese Rumba groove, Nyboma Mwan’dido and Bumba Massa, two of the primary vocalists of the group, join in harmonies sung in Lingala. Like Italian, Lingala has only seven vowels sounds, which help make it an exceptionally lyrical singing language.

This example shows, among other things, gracefully independent vocal lines that create counterpoint with the rest of the band’s groove. Listen for the ways the vocal phrases and rhythms play on downbeats and upbeats and shift their placement in the measure.

Gathering three of Les Quatre Étoiles (The Four Stars), Kékélé’s musicians draw on decades of experience in Congolese music with the likes of Tabu Ley Rochereau and Franco’s OK Jazz. I’m reminded in their work, most poignantly, of the value that comes from honing one’s craft over such a lengthy time.