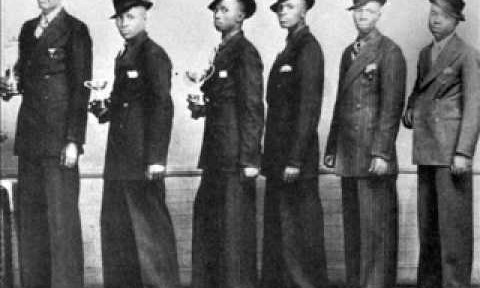 A search for music by Miriam Makeba turns up a classic source by a cappella innovator Solomon Linda.

Solomon Popoli Linda, born in 1909 in a small town in KwaZulu-Natal province, grew up with both the musical traditions of the Zulu people and those of the West.

Many men of his time and locale moved to urban centers seeking work. In Linda’s case, he moved to Johannesberg. Like many, he joined an all-male choir, in his case the Evening Birds, run by his uncles.

Linda is credited with the addition of male singers in the female vocal ranges and the extra bass voices, making a distinct departure from the a cappella style of the time.

Due to Linda’s innovative styling and the great popularity of the song, “Mbube” lent its name to a new style of a cappella music. Mbube gained popularity, developing into the Isicathamiya and gaining worldwide attention through the music and dance of Ladysnmith Black Mambazo.

The Evening Birds recording was brought from Africa by ethnomusicologist Alan Lomax, who shared it with Pete Seeger, who i turn recorded the song as “Wimoweh” with his band, The Weavers. The Weavers’ version, in turn, lead to other versions by Western artists, including The Tokens’ “The Lion Sleeps Tonight.”

While Linda’s song became an international hit, he died in poverty in 1962.

In 2004, Solomon Linda’s family brought suit against Disney for their use of “The Lion Sleeps Tonight” in “The Lion King” movie and stage show and were awarded $1.6 million in royalties.

Solomon Linda’s recordings, to my knowledge, are out of print. Purchases of recordings of “Mbube,” “Wimoweh,” and “The Lion Sleeps Tonight” will benefit his descendants.

Here’s where I started this enquiry, with Miriam Makeba’s version.