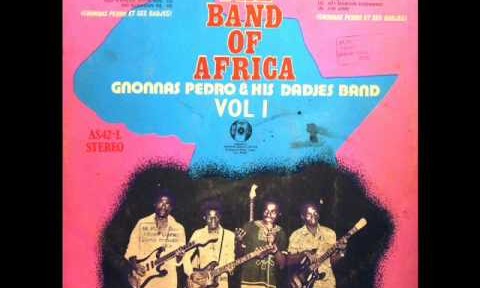 While enjoying DJ Balele’s set, some tunes familiar and some new to me, I was struck in particular with two by Gnonnas Pedro.

Something was so fresh, yet familiar about “Abigbedoto” and “Yiri Yiri Boum.” I couldn’t place it till I found that Pedro spent the last years of his life singing with the African salsa supergroup, Africando.

Born in Lokossa, Benin, on January 10, 1943, Gnonnan Sossou Pierre Kouassivi, later taking Gnonnas Pedro as his stage name, was raised in a musical family. His father was the leader of a choir and two brothers also became musicians.

With Pedro’s career starting in early 1960’s, he lead Pedro y Sus Panchos de Cotonou, Gnonnas Pedro and His Dadjès Band, and performed with the Ochestre Poly-Rythmo du Cotonou before being added to the Africando line-up.

Spanning styles from Highlife to Juju to Salsa, Pedro sang in Fon, Mined, Adja, Yoruba, French, Spanish, and English. In addition to his elegant singing voice, Pedro played guitar, trumpet, and saxophone. He was also well-regarded as a composer and dancer.

Pedro is credited with updating Agbadja, a style of music and a rhythm also sharing its name with a drum. Sources differ on the origin. Some trace Agbadja to the Fon people, while others attribute it as Agbadza or Agbaja to the Ewe.

Now, ladies and gentlemen, may I present Gnonnas Pedro’s cover version from 1976 of a famed song by The Beatles that Pedro calls, “Intelligemment.”